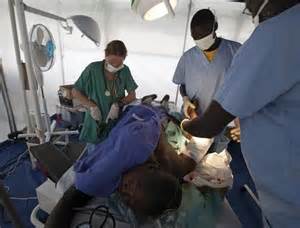 Authorities in war-torn South Sudan announced Tuesday a ban on foreign workers, including aid agency staff, and ordered their jobs to be given to locals.

There was no immediate explanation for the ban, which comes as NGOs warn of a looming famine caused by nine months of civil war in the country, which is heavily dependent on foreign aid.

A government statement, published in several newspapers, ordered “all non-governmental organisations, private companies, banks, insurance companies, telecommunication companies, petroleum companies, hotels and lodges working in South Sudan (…) to notify all the aliens working with them in all the positions to cease working as from 15th October.”

It said these positions should be advertised so that they can be filled by “competent South Sudanese nationals”, listing roles ranging from receptionists to executive directors.

But South Sudan’s Information Minister Michael Makuei told AFP the order only covered “jobs South Sudanese can do”, suggesting the statement from the ministry of public service may have been misleading.

“It is not all foreigners, but for those employed in specific jobs,” he said by telephone from Ethiopia, where he is taking part in peace negotiations.

Still, the minister confirmed that the positions should be filled “through the guidance of the ministry of public service”, therefore giving the government control over who is appointed.

South Sudan is heavily dependent on international aid organisations for humanitarian aid for more than a million people who have been internally displaced by the civil war.

Oxfam said that it employs South Sudanese — like other aid agencies — but still has “many foreigners in key roles”, and restricting that would frustrate efforts to support people in need.

“If this order were to come into effect it would massively disrupt aid programmes across the country which feed over one million people,” said Oxfam director Tariq Riebl.

“South Sudan is on a knife-edge and could easily tip into famine in 2015 — even though the aid effort here is huge, it is not reaching many of the people who desperately need help. We need to be expanding aid programmes in South Sudan, not restricting them.”

The international NGO Global Witness, which campaigns to prevent natural resource-related conflict and corruption, said the order was “disturbing” and accused the government of “attempting to expel trained aid workers at a time of a grave humanitarian crisis”.

“The decision demonstrates a total disregard for the lives of the 1.3 million citizens displaced by this oil-fuelled conflict,” it said, adding that the government also “risks crippling the economy”.

Skilled foreign workers are key to the country’s oil industry, which provided some 95 percent of the government budget before fighting began.

Workers from regional neighbours including Ethiopia, Eritrea, Kenya, Sudan and Uganda, provide key services, while foreigners are vital to the mobile telephone network.

South Sudan suffers from a major shortage of skilled workers, with only around a quarter of the population being able to read and write.

Fighting broke out in the oil-rich country, the world’s youngest nation, in December 2013 following a clash between troops loyal to President Salva Kiir and his former deputy Riek Machar.

The war spread rapidly across the country and has been marked by widespread human rights abuses and atrocities by both sides.

The views expressed here do not necessarily represent the views of Africa Shipping Logistics.